That soup recipe is really similar to my first vegetable soup. I just removed/added some vegetables to change the taste a little bit, but other that that it is the same kind of easy and quick recipe. The main difference is the celery (which is one of the many vegetables I use to dislike… a lot. But as I said, things change, and celery has recently earned a free pass in my kitchen! 🙂 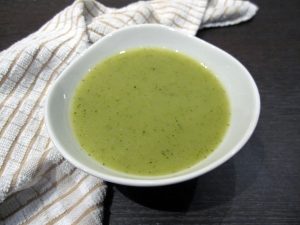 1- Boil the water in a large deep pan.

2- Peel the potato and wash it as well as the courgettes. Cut them into chunks and put them into the boiling water.

3- Cut the leek in their length and wash inside the leaves. Then slice them roughly and leave them on the side.

5- Put the leek and the celery into the boiling water. Add salt, pepper and leave for 20 to 25 minutes while stirring from time to time. Make sure the vegetables are cooked, then let cool down a little bit before mixing them with either a blender or a hand blender. It’s ready!